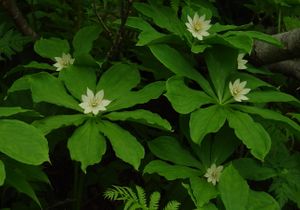 Paris japonica (Japanese: キヌガサソウ属, Kinugasasou meaning 'canopy plant') is a species of the genus Paris in the family Melanthiaceae, which has the largest genome of any organism yet assayed, about 150 billion base pairs long.[1] An octoploid and suspected allopolyploid hybrid of four species, it has 40 chromosomes. It is native to sub-alpine regions of Japan.

A slow growing perennial, it flowers in July. The showy white star-like flower is borne above a single whorl of about eight stem leaves. It prefers cool, humid, shady places.

The rare flower has a genome 50 times bigger than humans. With 150 billion base pairs of DNA per cell, it is the biggest genome in the world, and the DNA from a single cell stretched out end-to-end it would be taller than 300 feet (91 m), such as Big Ben.

The flower has 19 billion more base pairs than the previous record holder, the marbled lungfish, whose 130 billion base pairs weigh in at 132.83 picograms per cell.